No, no, ticks do not fall from trees. They come from fields and undergrowth, rich in wild grasses, shrubs and bushes. If they need a bloodmeal, ticks will climb on top of grass and ferns and hook onto the skin while we walk by. 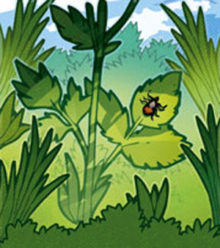 Before starting their meal, ticks climb around the body, looking for warm and humid place, such as knee folds, armpits, or the scalp. The tick bite is painless, but it can transmit diseases to humans and animals. 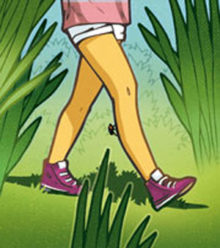 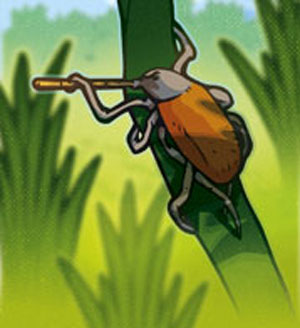 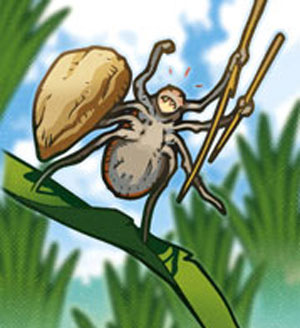 Elsewhere in the world, in the United States, in Africa or around the Mediterranean, ticks can transmit rickettsia3.
Rickettsia causes two type of diseases, typhus6 and the Rocky Mountain spotted fever. These infections cause fever with headaches and a skin rash, called “spots”. Sometimes potentially serious complications can occur. Rocky Mountain spotted fever is lethal in 10% of cases in the United States, whereas the Mediterranean spotted fever has a mortality rate of about 3%.

Recently, researchers from the Institute of Microbiology from the University of Lausanne, in collaboration with the National Reference Centre for tick-transmitted diseases, discovered that ticks in Switzerland in addition to several microbes such as Anaplasma phagocytophilum also host bacteria affiliated with chlamydia7, such as Rhabdochlamydia helvetica.

The risk of transmission of the Borrelia bacteria increases with the duration of the bloodmeal. This risk is particularly high if the tick stays on the body for more than 24 hours because once a tick is full with blood it is easier for it to transmit the bacteria through simple regurgitation8.

Apart from ticks, how else might we encounter microbes in nature?

On tree leaves or in the ground, around the roots, are multiple microbes that are inoffensive for most of us. However, a large number of wild animals can carry human disease-causing germs. The fox for example sometimes hosts a worm called Echinococcus. By eating berries contaminated with fox poop, we ingest Echinococcus, which causes liver and lung diseases. Foxes have become more used to urban environments and come close to our houses and vegetable gardens. This is how Echinococcus can end up in our salads. Always wash your homegrown vegetables well before consuming them.

Tularemia1 = infectious disease also called rabbit fever is caused by the bacterium Francisella tularensis. Hare and rabbits but also small wild rodents such as field mice or voles are reservoirs for this bacterium. It can also be found in the water and the soil. It is transmitted to humans by infected ticks or by contact with contaminated environment or sick animals. Tularemia causes fever, headaches, muscular pain and local ulcers. It is perfectly curable with antibiotics2.

Antibiotic2 = a drug which allows to kill bacteria or at least to stop their growth. Antibiotics act against bacteria but do not help treat diseases caused by viruses and parasites.

Rickettsia3 = Rickettsia are a bacteria species from the Rickettsiaceae family. These bacteria can only survive and multiply inside a cell. They are transmitted to humans and animals through different arthropods4.

Arthropod4 = small animal with articulated legs and an external rigid skeleton, which forces it to evolve through successive molts. Over one million and a half different species of arthropods exist. It is the one animal group most present on earth, including insects, arachnids (spiders, scorpions and mites), shellfish and Myriapoda (centipedes).

Mite5 = Arthropod part of the arachnid family, like spiders. Mites have 4 pairs of legs whereas insects only have 3. There are a great number of mites but most of them are not visible to the naked eye. However, some of them, such as the tick, can reach a size of a few millimeters.

Typhus6 = contagious and serious disease caused by rickettsia3 and transmitted to humans through mites4 (flea or lice) living on mice and rats. Typhus is characterized by a strong fever with headaches and sometimes a skin rash.

Chlamydia7 = There are several chlamydia species. They can cause different types of diseases. One of these bacteria, Chlamydia trachomatis is responsible for a frequent sexually transmitted infection (STI): it affects about 5% of the sexually active people in Europe. The infection usually goes unnoticed because it is often asymptomatic. However, it is contagious and can cause sterility and miscarriages in infected women.

Regurgitation8 = Is said of when the food content of the stomach or esophagus goes back to the mouth. Several birds and some mammal regurgitate food for their babies. This term comes from Latin « gurges » which means « the throat ».